The controversial demon paintings have a reputation for shocking and sometimes terrifying people. However, angel paintings are frequently thought to be soothing and comforting, offering a sense of hope and tranquility.

The paintings of the devil and angel each possess a special force and beauty, and it is up to the viewer of these works of art to ponder on which side they prefer. The following are examples of these paintings in history.

The Case for Escher’s ‘Angels and Devils’

One of M. C. Escher’s most well-known and recognizable piece is “Angels and Devils.” The artwork is a woodcut print that shows an endless stairway. An angel is depicted on the left, and the devil is depicted on the right. The angel and the devil are engaged in a never-ending struggle as the angel tries to go up the stairway, and the demon tries to go down it. The print depicts the ongoing conflict between good and evil in visual form.

“Angels and Devils” by M.C. Escher, a master of optical illusions, is a shining example of his talent. The staircase in print seems to go on forever, making it an example of an impossibly designed item. The application of forced perspective results in the creation of this optical illusion. As the figures are composed of interlocking geometric shapes, the print illustrates Escher’s usage of tessellations.

It’s an interesting and visually amazing piece of art, “Angels and Devils.” Escher’s artistic talent is perfectly displayed in this piece, which is likely to inspire awe in spectators.

Bruegel the Elder’s The Fall of the Rebel Angels

The angels in this picture by Peter Bruegel, the Elder, are depicted oddly and unconventionally. Bruegel depicts the various monstrous devil paintings taken from the book of Revelation. They appear as monsters that are a hybrid of humans and animals and arrive in a massive swarm. Even a ridiculous-looking plague has been used to describe them. 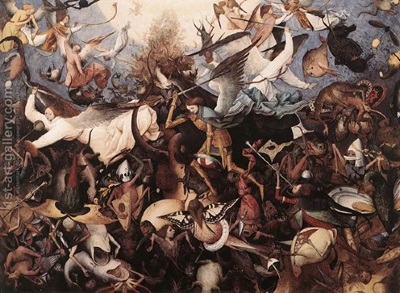 St. Michael, the sole person in the middle, is given the horrifying job of eliminating and combating these monsters. He has some devoted angels to help him repel the creatures, which is fortunate for him. The creatures swarm St. Michael and the angels as they stretch out to fill the full lower half of the painting, appearing to drop from the sky. In this painting, Bruegel effectively evoked chaos and movement.

He chose to display an enormous number of various animals rather than a small number of powerful, honorable demons. A moth, a puffer fish, an oyster, a snake, and even a skeleton can be seen if you look closely. Despite the lack of realism and ease of belief in this drawing, Bruegel did a good job of conveying the tremendous pandemonium and sheer quantity of the descending demons.

Two Angels and the Madonna and Child by Filippo Lippi

Compared to Peter Bruegel the Elder’s earlier picture, Madonna and Child with Two Angels by Filippo Lippi, not only the angels but the entire scene is far more serene. One of Fillipo Lippi’s most well-known and admired paintings from the Italian Renaissance is this one. The image of the Virgin Mary praying is shown in front of the child, who is held aloft by two jovial angels. 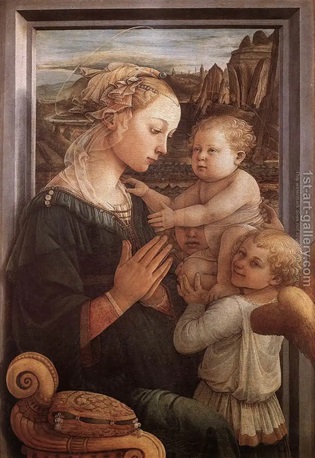 The two angels resemble troublemakers or mischief-makers in many ways. However, the painting is yet serene, tranquil, and elegant. Beautiful, idealized landscapes that were probably influenced by Flemish paintings dominate the background. In addition to the ornately designed arm cushion, the chair molding is also quite lovely. Mary herself has nicely groomed hair and is beautifully adorned.

The tone and passion in this painting feel more in line with a “devil” themed piece, even though it is an angel picture rather than a demon one. It was originally intended for this nearly frightening artwork to be the centerpiece of an altarpiece. Instead, it was discovered in an altarpiece’s upper section in the Franciscan Church in Montefiore dell’Aso.

Carlo Crivelli was a very skilled and meticulous artist. This artwork appears realistic thanks to his delicate brushwork and almost surrealistic treatment. The artist paid particular attention to including two components that contribute to the terrifying quality of this piece, the angels.

Apart from the representation of Christ, Crivelli paid particular attention to capturing the sadness, agony, and overwhelming horror of the features of the little angels. Many other images of youthful angels resembling children show them joyful, carefree, and even mischievous. This painting, however, depicts what would generally be adorable little angels in complete agony.

Death and the Miser- Heironymus Bosch

An elderly man who appears to be divided between redemption and sin in this panel, which was likely a component of a more extraordinary altarpiece, is dying. A man, who may be a younger version of the miser, tosses coins into a chest at the foot of the bed while holding a rosary in his other hand. His hypocrisy reveals his past indecisiveness. The miser still hesitates as he approaches death in his final hours.

He is torn between turning toward the cross the angel is pointing to on the window, which represents righteousness, or taking the demon’s bag of gold, which stands in for sin. We’ll never honestly know if the miser will choose Christ’s salvation or earthly riches.

The angels and demons paintings in art history provide a distinctive viewpoint on the conflict between good and evil and the various ways that painters have depicted this conflict over time. These artworks offer a priceless window into the human condition and the various lenses through which we perceive the world.

What is the Best P2P Bitcoin Exchange? Everything You Need To Know