The social media celebrity and makeup artist, Danielley Ayala, also known as danielleyayala on social media, charmed fans worldwide. Due to her provocative looks and talent, she successfully gained a massive following on all social media platforms, especially on Instagram. Since she wants to make herself available to her fans, they got a chance to see more of her life on Only Fans, YouTube, Facebook, Twitter, and Instagram.

It’s no wonder that many brands want to collaborate with her. So, the attractive celebrity makes a lot of money thanks to the corporates that want Danielley to promote their products on various platforms. Apart from taking on many deals while promoting different brands, Danielley is also a model with an accent on promoting lingerie and swimsuit modeling.

If you want to learn more about her early life, lifestyle, and career, continue reading this article.

Ayala was born on February 23, 1994, in Los Angeles, California. When her career took off, she moved to Miami, Florida.

Even though her fans would think this isn’t true, Danielley claims that she struggled a lot with her personal appearance when she was a kid. Due to problems with her thyroid gland, she struggled with weight issues and acne covering her face.

In addition, during her middle and high school years, the social media influencer had to go to six different schools since she was heavily bullied. In an interview, Danielley stated that there were times when a group of girls jumped her because they didn’t like what she looked like.

Many of her fans compliment her on her well-defined body. We can assume that she weighs around 143 pounds from her photos, while her height is 5 feet 8 inches. Danielley has several tattoos covering her body, contributing to her sexy physique. Due to her looks and gorgeous body, she has paved her way into the social media celebrity world.

The makeup artist and celebrity regularly posts provocative photos on Instagram. However, Danielley Ayala doesn’t post nudes. Some people criticize her choice of posting lewd photos, although Danielley doesn’t seem to mind. She responds by saying that she’s in her early 20s and she’s lucky to have money to pay for her education and lifestyle.

When asked how she thinks her future kids will react to her sexy photos, Danielley said, “My future babies will be happy that they don’t need to starve and can get an education because I can pay for it, and they have a mom who loves them. I’m also in my early 20s, LMAO, like I’m doing what I need to and paying for everything myself, paying for my school, which I start next month, and surrounding myself with amazing people. So, try again.”

When it comes to her career, Danielley Ayala walks proudly in the world of beauty, glamour, fashion, and make-up. To learn more about the art of make-up, she joined Make-up Designory Los Angeles Schools of Make-Up. During her training, she learned the necessary skills in make-up artistry. Almost two years have passed since she completed a course that specializes in fashion and make-up.

The influencer created a website where she displays some of her beauty products and companies. Thanks to her massive following on social media, many companies hire her to promote their products.

As of June 2021, Danielley has over 5 million followers on Instagram, making her an Instagram royalty. Apart from her make-up career, she’s an avid hairstyle artist.

Thanks to her fans and her make-up and social media career, Danielley

Ayala earns enough money to lead a comfortable life. According to Wikipedia, Forbes, and Business Insider, the influencer has a fortune of over $2.7 million, making her one of the wealthiest Instagram influencers. 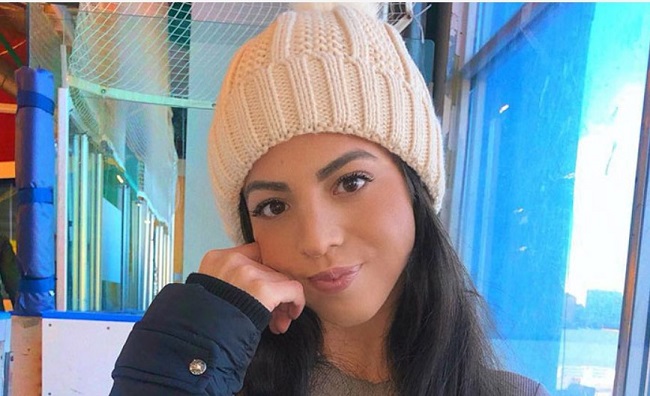 Nowadays, not much is known about her private life as she tries to keep it separate from her public life. However, almost six years ago, she began dating Peter Shelegin, and they were inseparable. Peter was a regular “guest” in her Instagram posts and seemed to have a fun time.

On March 28, 2017, Danielley posted a photo of the two of them on Instagram. She mentioned in the caption that they have been dating for two years. Sadly, that post was the last one of them seen together. Since then, the couple went their separate ways, and they are no longer together.

Since her breasts are very large, she has experienced back problems in the past, waking up at night and crying from the pain. Due to this problem, she decided to have surgery and reduce her bra size. Now, her breast size is 32DDD.

Her second vlog details her experience in making breakfast, following a tutorial from none other than Gordon Ramsey. She stated in the video that she had never cooked in her life. At first, Danielley seemed like she was struggling while preparing “Eggs Benedict,” but she seemed to have prepared a nutritious meal in the end. Check the video that has almost 200,000 views on YouTube.

Danielley Ayala is a celebrity influencer and make-up artist. The beauty mogul has come a long way from the bullied kid to a provocative celebrity that fans adore.

When she was in middle school and high school, Danielley was bullied by other girls because they didn’t like her looks. Because of this, she had to change schools six times.

Although she was born in LA, California, the beauty model now lives in Miami, Florida. From the many photos she posts on Instagram, she can enjoy her stay in Miami.

Danielley is a pet lover and keeps a dog at home. If you want to know more about the social media influencer, make sure to check some of her online platforms.