When Amy Slaton first appeared on the TLC’s show “1000 lbs sisters”, people thought that she didn’t stand a chance to qualify for bariatric surgery. The show followed the lives of Amy and Tammy Slaton, while trying hard to lose enough weight so that they could go through surgery.

Since the popularity of the show changed Amy’s life for the better, she managed to make a name for herself and paved the way for others who want to lose a lot of weight.

Apart from detailing her weight-loss journey, Amy Slaton is now a popular American YouTuber. Her career as a YouTuber focuses on creating make-uFp and food-related content. Tammy Slaton sometimes appears in her sister’s videos. Thanks to her fame in the reality weight-loss documentary, Amy became quite popular on various social media platforms, especially on YouTube. As of June 2021, she has over 400k subscribers.

If you want to know more about Amy’s life, sit back and relax, as we made this just for you. 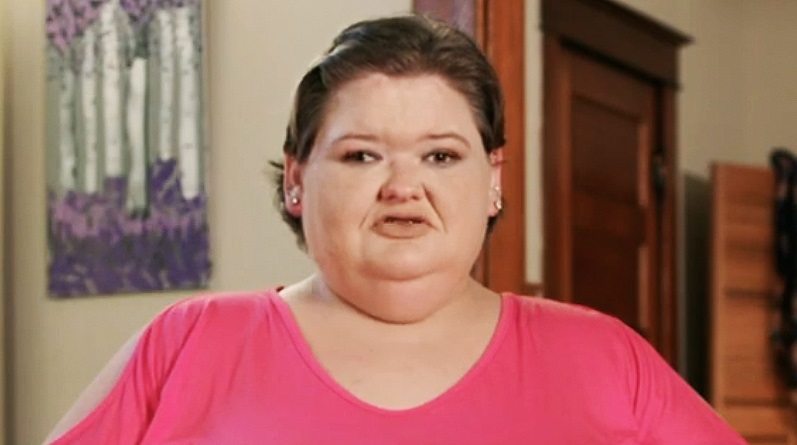 Amy Slaton, or currently known as Twilight Queen, was born on October 28, 1987, in Dixon, Kentucky city. Her zodiac sign is Scorpio.

Not much is known about her educational background, although she has at least finished high school.

When it comes to her family members, Amy has a sister named Tammy. The siblings went through the weight-loss journey together as they both struggled with weight issues from a young age. Later in the reality show, fans discovered that Amy also has a brother, named Chris Combs.

Her sister, Tammy, was born on July 27, 1989. Fans still don’t know a lot about Amy’s father. He died when Amy was very young. Her mom, Darlene went on to marry Frank Stars, after Amy’s father’s death.

Amy and Tammy no longer live with Darlene. While growing up, Amy said that her grandmother had a great influence on her life. Both sisters have many health issues due to their obesity. Some of the health conditions include, diabetes, heart problems, and high blood pressure.

Amy owes her career to YouTube. Although her channel wasn’t as popular as nowadays, Amy managed to gather some fans even when she created the first video on January 11, 2011. The name of her YouTube channel is “Amy Slaton-Halterman.”

Fans could browse through the many videos she has created over the years. Her first video is titled: “New Slaton sister vlog.” The make-up enthusiast posted the video on January 31, 2014. Many of the viewers were shocked by her obese nature. However, this didn’t stop Amy to thrive and detail every aspect of her weight-loss journey.

There is one video on her channel that stands out from the others. Its title is: “The Power of Make-up.” Amy posted the video five years ago. The video has over 7.6 million views as of June 2021.

The famous social media celebrity focuses mostly on creating content in the niche of make-up and food. Following the success of the reality show, Amy has gained a lot of confidence that she uses to inspire her thousands of fans. She wants to inspire other obese Americans who want to follow in her footsteps. Thanks to her fans, Amy has over 44 million views on her thousands of YouTube videos.

Her problems with weight gain began following her grandmother’s death. Since her mother had to work three to four jobs and was busy most of the day, Amy had to buy packaged food.

For over a decade, Amy and Tammy have struggled with weight. At one point, the siblings began having health problems, such as diabetes and high blood pressure. Tammy started having limited mobility, so she had to move in with Amy and her husband.

The “Twilight Queen” married her high-school sweetheart, Michael Halterman. Prior to tying the knot, the couple dated for several years. They got married in 2019, in Nashville, Tennessee. When Amy decided to have a baby with Michael, she knew that she had to lose a lot of weight.

Amy has stated, “I always wanted to be a mom. I feel incomplete as a woman because I can’t have a kid.” Luckily, the couple welcomed their son, Gage, in November 2020.

Thanks to her appearance in the reality documentary show, titled “1000 lbs sisters,” Amy has accumulated over $250,000. When she had gained 100k subscribers on her YouTube channel, Amy aimed to receive a “Silver Play Button” award from YouTube.

Her channel has grown, exponentially, following her appearance on the TLC’s show. It’s no wonder that her revenue has grown as well and now she earns almost $155,000 per year from the videos she shares with her YouTube subscribers.

Amy Slaton is a popular YouTube make-up artist and influencer, who gained a lot of fame after appearing on a TLC show. The show, “1000 lbs sisters,” follows the journey of Amy and Tammy who struggle to lose weight to qualify for weight-loss surgery.

Luckily, Amy delivered a healthy baby boy on November 2020. Her husband Michael was very supportive of his wife’s choice to lose a lot of weight to be healthy.

Even though Amy has had her YouTube channel for over ten years, she gained a lot of fame after the show ended. She has posted over 1000 videos on the platform and has over 400k subscribers.